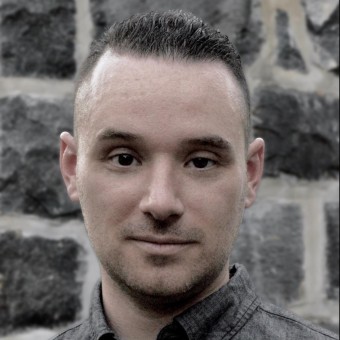 Adam Vidiksis is a composer, conductor, percussionist, improviser, and technologist based in Philadelphia whose interests span from historically informed performance to the cutting edge of digital audio processing. His music often explores sound, science, and the intersection of humankind with the machines we build.

Often drawing from both acoustic and electronic sounds, Adam Vidiksis's music has been heard in concert halls and venues around the world. Critics have called his music “mesmerizing”, “dramatic”, “striking” (Philadelphia Weekly), “notable”, “catchy” (WQHS), “interesting”, and “special” (Percussive Notes), and have noted that Vidiksis provides “an electronically produced frame giving each sound such a deep-colored radiance you could miss the piece's shape for being caught up in each moment” (David Patrick Stearns of the Philadelphia Inquirer). His unique approach to composition has been praised for its “outstanding control” (Philadelphia Weekly) and for being “restrained” and “magical” (Local Arts Live).

Born and raised on Staten Island, the least populated borough of New York City, Vidiksis’s musical studies began on the piano at age four. As a child, he could frequently be found hitting nearly everything around him in order to experience the sound it would make: Vidiksis soon discovered his love of creating new musical possibilities and his passion for all things percussion. As a young man, he developed a deep interest in science and technology, an enthusiasm that has profoundly influenced his work as a musician. He is very active as a performer, teacher, conductor, and composer, and is an enthusiastic advocate for new music. His music often explores sound, science, and the intersection of humankind with the machines we build.

A devoted advocate of new music and improvisation, Vidiksis has served for nine years as the conductor of the Temple Composers Orchestra, and three as a founding member on the executive board of the Impermanent Society of Philadelphia, a Philadelphia-based organization focused on promoting freely improvised live performance of experimental sound and movement. He is a founding faculty member in composition and performance at the SPLICE Institute, currently in its third year, where he continues to teach. His work with the Splice Ensemble, formed from the performance faculty of the institute, has been featured at national conferences and major venues around the world. He has performed in the North America, Europe, and China as an improviser in both percussion and electronics. His deep interest in bringing new works to life has led him to conduct numerous premieres, working with international groups such as Ensemble NJ_P and the Black Sea Symphony. Vidiksis previously held positions as director of the wind ensemble at Drew University in Madison, NJ, and also as assistant conductor of the Delaware County Symphony in Aston, PA.

Vidiksis’s research in music technology focuses on techniques for realtime audio processing, designing gestural controllers for live digital performance, and machine improvisation. He has presented his research at a number of institutions, including the Center for Computer Research in Music and Acoustics at Stanford University, the Georgia Institute of Technology, the McNally Smith College of Music, and the Institute for Computer Music and Sound Technology in Zürich. His gestural controller, the Tapbox DSP, was a semifinalist in the 2012 Guthman Musical Instrument Competition. As a specialist in music technology, Vidiksis has worked with many artists and ensembles, including Gene Coleman, Ge Wang, Eric Chasalow, Benjamin Broening, Toshimaru Nakamura, Network for New Music, Mari Kimura, Elainie Lillios, Paula Matthusen, Matthias Müller (SABRe), Nicholas Isherwood, Donald Nally, and the Crossing.

Vidiksis holds degrees from Drew University, New York University, and Temple University, culminating in a doctoral degree in music composition. He is an Assistant Professor of music technology and composition at Temple University's Boyer College of Music and Dance. He is the director of the Boyer Electroacoustic Ensemble Project (BEEP), and the Temple Composers Orchestra, faculty advisor to conTemplum (Boyer College’s new-music student organization and student chapter of the Society of Composers, Inc.) and Pitch, Please (a LGBTQIA+ advocacy a cappella group), a 2017 Conwell Entrepreneurial Fellow, and has co-curated the electroacoustic concert series Cybersounds. Dr. Vidiksis serves on the Composition and Percussion Performance faculty at the SPLICE Institute at Western Michigan University. He volunteers on the boards of the Society for Electroacoustic Music in the United States, the Society of Composers, Inc., and the Association for the Promotion of New Music in New York City.

My work focuses on exploring new timbral soundscapes in both electronic and acoustic works, frequently using found objects that highlight and explore the vast world of sounds that surround us everyday. I often use the computer not only as a means of enhancing and manipulating the sounds I produce, but as a digital performer on equal footing with its human counterparts. I have a deep interest in science and technology, an enthusiasm that has profoundly influenced my work as a musician. My music often explores sound, science, and the intersection of humankind with the machines we build. My research in music technology focuses on techniques for realtime audio processing, designing gestural controllers for live digital performance, and machine improvisation.