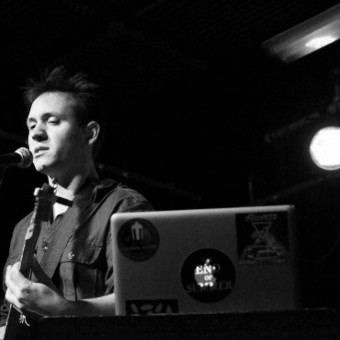 Anthony Caulkins is a composer, performer, and music technologist based in Southern California

Anthony Caulkins leads an eclectic musical life as a composer, guitarist, and technologist based in Southern California. Through his compositions, Anthony explores questions relating to gesture, modularity, and metaphorical representation. Over his career as a composer, Anthony has developed a voice that focuses on both intricate systems and improvisatory practices. Combining the sound worlds of both acoustic and electronic instruments in his compositions, Anthony invents ideas to resonate with audiences of all types. His pieces have been performed internationally, with premieres in the United States, Italy, The Netherlands, and Spain. Anthony’s most recent project is a solo electronic rock show, that uses interactive technologies, for real-time beats, textures, and effects – Songs For A New Era

Along with composing, Anthony is a frequent performer of both written and improvised music. He is a versatile guitarist who has years of experience in solo, chamber, and orchestral contexts. In the last few years, he has spent time exploring chamber, free improvised, and jazz contexts. Beyond this, Anthony is a frequent pit orchestra musician in the Los Angeles area. Anthony studied classical guitar with Professor Javier Calderon and jazz performance with Professor Kei Akagi. Currently, Anthony is a member and co-founder of three bands: Coyote The Mist, a creative improvisation duo; The Real Pretenders, a dark indie duo; and GLIT, an industrial hip-hop group.

As a technologist, Anthony explores various modes of expression through the use of interactive computer systems for improvisation. Recently, Anthony has begun working on an algorithm for an autonomous computer improviser whose basic method of understanding music is gestural. This computer performer has had multiple performances, most notably in Anthony’s MFA thesis recital, E-Motions (what about gesture?).

Anthony completed his M.F.A. in Integrated Composition, Improvisation, and Technology at the University of California – Irvine, where he studied with with Christopher Dobrian, Nicole Mitchell, Lukas Ligeti, Kojiro Umezaki, and Michael Dessen. Prior to his masters studies, Anthony received his Bachelor of Music in Composition at the University of Wisconsin – Madison, where he studied with Professors Stephen Dembski and Laura Schwendinger.