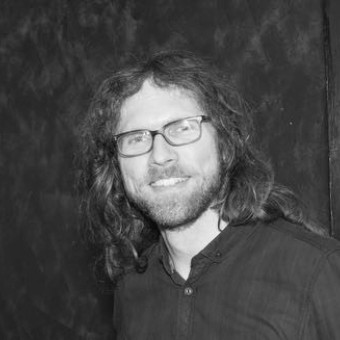 Brett Eastman was born in Redmond, WA on April 13th, 1980. He grew up in Redding, CA before moving to San Francisco to pursue composition at San Francisco State University. He studied with Richard Festinger, Josh Levine, and Carlos Sánchez-Gutiérrez. He also studied classical percussion with David Rosenthal, drum set with Akira Tana, and piano with Inara Morgenstern.

San Francisco composer Brett Austin Eastman has recently written works for Slow Wave, Keyed Kontraptions and Siroko Duo, as well as a quartet he put together for a concert he produced titled “Punk in Times of War.” He is currently co-producing a three-part concert series on the theme of feedback with flutist Jessie Nucho, and has two pieces for the series thus far. He is also currently working on a piece for piano and electronics, commissioned by San Francisco pianist Tingyuan Luo. He has composed/produced electronic music and has done sound design, most recently for the feature-length film The Murder of Hi Good by filmmaker Lee Lorenzo Lynch.

In addition to being a composer, Brett has been an active musician and producer in the independent rock music scene in Bay Area for a number of years, having played in bands such as Andy Human and The Reptoids, Luke Sweeney, LENZ, Shalants, and Girls. He has recorded and produced records by Oakland-based underground bands including The World, LENZ, PANG, BAUS, Penny Machine, Dragontime, Brian Glaze and the Tiffany’s, as well as Andy Human and The Reptoids.

Intimate harmonic language, sensitive melodies, pre-conceived form, the use of distorted symmetry, use of percussion and texture, influence of punk and ambient music.