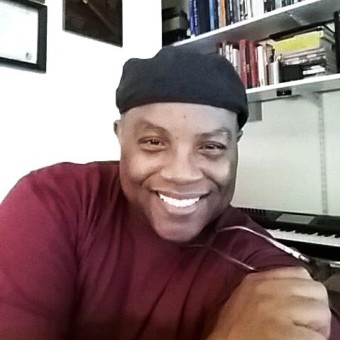 James is a Concert, Film, and Theatre Composer and Director. He enjoys creating new and challenging music for theatre, films, and new media.

Known for being a modern-day Renaissance man, James embodies the disciplines of Composing, Directing, and Writing.  As a composer, his music style covers musical genres such as Orchestral, Contemporary Classical, Instrumental, Soundtrack, Jazz, and Soul. He has scored music for independent films as well as local and regional theatre projects having pinned three musicals of his own. He has also written concert music as well.

James is a member of BMI, The American Composers Forum, The Society of Composers & Lyricists, the American Society of Music Arrangers and Composers, The National Association of Negro Musicians, Inc., Composers Diversity Collective, and The Dramatist Guild of America.

James has a BA from California State University Dominguez Hills and an Executive MBA from Grand Canyon University. He completed his study in composition and film scoring at UCLA. He spent his early years growing up in Riverside, California dreaming of composing, directing, and writing for theatre and film. I guess it kinda worked out.

"I believe perseverance dictates that every person arrives at their destination exactly on time."

Individuals looking to collaborate on film, theatre or experimental projects James is open and available.