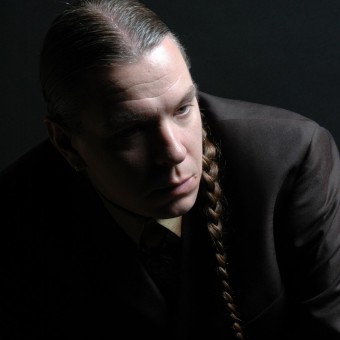 Jerod Impichchaachaaha’ Tate (Chickasaw) is a dedicated American Indian classical composer and pianist who expresses his native culture in symphonic music, ballet and opera. All of his compositions have been commissioned by major North American orchestras, ensembles and organizations and his works are performed throughout the world.

Jerod Impichchaachaaha' Tate was born in 1968 in Norman, Oklahoma, and is a citizen of the Chickasaw Nation. Mr. Tate is dedicated to the development of American Indian classical composition, and a recent review by The Washington Post states that "Tate's connection to nature and the human experience was quite apparent in this piece...rarer still is his ability to effectively infuse classical music with American Indian nationalism." This review was a response to a performance of Iholba? (The Vision), for Solo Flute, Orchestra and Chorus, which was commissioned by the National Symphony Orchestra and premiered at the Kennedy Center for the Performing Arts.

In 2006, Mr. Tate was the recipient of the Joyce Award which supported the commission of Nitoshi' Imali, Concerto for Guitar and Orchestra, which premiered in 2007 with soloist Jason Vieaux and the Civic Orchestra of Minneapolis, conducted by Cary John Franklin. In 2008, he was appointed Cultural Ambassador for the State of Oklahoma. His new work Lowak Shoppala' (Fire and Light), for orchestra and children's chorus, commissioned by the American Composers Forum Continental Harmony Project, premiered November 21, 2009 in celebration of the new Chickasaw Cultural Center in Sulphur, Oklahoma.

Mr. Tate received his BM in Piano Performance from Northwestern University where he studied with Dr. Donald J. Isaak. He received his MM in Piano Performance and Composition from the Cleveland Institute of Music where he studied with Elizabeth Pastor and Dr. Donald Erb. Shortly after beginning his piano studies at the Cleveland Institute of Music, Jerod's first composition, Winter Moons ballet score, was commissioned by Dr. Patricia Tate and premiered at the University of Wyoming in 1992. Colorado Ballet subsequently performed it in 1994 and 1996.

Mr. Tate's middle name, Impichchaachaaha', means "high corncrib" and is his inherited traditional Chickasaw house name. A corncrib is a small hut used for the storage of corn and other vegetables. In traditional Chickasaw culture, the corncrib was built high off of the ground on stilts to keep its contents safe from foraging animals.

My compositions are very dramatic and theatric nature. I draw on many different composition approaches and orchestrations, depending on what the project needs. While focusing on American Indian subjects, I seek to express what I feel is a unique ethos of Indian Country.

From an early age, I was saturated with music and theatre from both of my parents. My father, Charles, is currently a Tribal and Special District Judge in Oklahoma. He is also a classically trained pianist and vocalist who was heavily involved with opera and musical theatre performances throughout his college career. He continues vocal and theatrical performances to this day. As a child, I listened to his performances of Bach and Rachmaninoff, which had a decisive influence on my decision to be a pianist. My mother, Patricia, was a professor of dance and professional choreographer and spent her entire career in the theatre. Throughout my childhood, I spent evenings and weekends at my mother's rehearsals and performances for dance concerts, musicals and ballets. She was also the first person to commission music from me for her original ballet entitled Winter Moons. Winter Moons is based on American Indian stories from the Northern Plains and Rocky Mountains and provided my first opportunity to express myself as an American Indian through the fine arts.While attending Northwestern University as a piano major, I studied with Dr. Donald J. Isaak, who was a truly unique teacher. Not only was he a master of piano technique and interpretation, he was an orchestral thinker in his playing. He profoundly influenced the way I listen to music. After graduating from Northwestern with a BM in Piano Performance, I went to The Cleveland Institute of Music to begin a masters degree in piano performance, where I studied with Elizabeth Pastor. I added composition to my masters degree and began studies with Dr. Donald Erb. While completing my MM in Piano Performance and Composition, I began composing works based on traditional Chickasaw and other American Indian music.In 1994, I was invited to participate in the first convention of American Indian composers, in Boulder, Colorado where my double bass concerto entitled Iyaaknasha' was performed. At the convention, I met a Comanche composer from Oklahoma City named Dr. David Bad Eagle Yeagley. Dr. Yeagley expressed his vision of American Indian classical composers following the same path as other American Indian artists - abstracting traditional materials into contemporary expression. Dr. Yeagley's words compelled me to convey the same vision to audiences abroad, and to deliver the message to other American Indians that classical composition is an arena starving for their participation.As my musical path has evolved, it has become equally important to help young American Indians find a voice in classical composition. In fact, I believe American Indians have a natural ability to represent themselves musically and intelligently in the classical fine arts. I am currently Composer-in-Residence for the Chickasaw Summer Arts Academy and the American Composers Forum/Joyce Award community outreach program. I was also Composer-in-Residence for the Grand Canyon Music Festival's Native American Composer Apprentice Program. All three programs provide classical composition instruction for American Indian students and feature their works in public performances.I find an unyielding source of strength, love and support from my grandmother, Juanita Foshi' Keel Tate, who gave me the name Taloa' Ikbi (the Chickasaw description for a composer), encouraging me to continue the vision. With this vision burning in my heart, I am dedicated to spending my life looking for Indian solutions in classical music composition.

Mr. Tate received the 2006 Alumni Achievement Award from the Cleveland Institute of Music, was appointed Cultural Ambassador for the State of Oklahoma in 2008 and has received awards from Meet the Composer and the Percussive Arts Society.